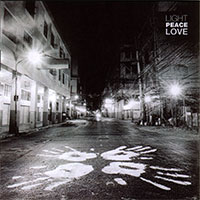 “Light Peace Love” probably is the country’s most anticipated album of 2005, and for good reason — Bamboo has released another keeper.

Relying on the strong radio playtime of the single “Hallelujah” released several weeks ago, the band appears headed to establish itself as one of the the Philippines’ best rock acts.

“Hallelujah” is a beautiful song, though certainly not as anthemic as “Noypi,” the song that put them on the pinoy rock map. The song hints of U2 influences, captivating rhythm with hauntingly beautiful wails — it’s their own “Sunday Bloody Sunday.”

The rest of the album is a different lot, songs that may tag the carrier single misplaced. Certainly, the band chose not to limit their music to what the critics want, but leaped forward in ways that may please new listeners, at the risk of alienating those who bought their debut record “As The Music Plays” just for “Noypi” and “Masaya.”

Bamboo Manalac’s shows his rap/scat influences with the Eminem–like “Alpha Beta Omega,” and then rocks with “F.U.” and “Children of the Sun.” The tracks “Truth” and “Peace Man” are my personal favorites, cheerful and upbeat pop/blues sound. Pressed if there are any “Rivermaya–inspired” songs, my guess would be “I-You.”

299 pesos for a 10 track CD of fresh pinoy music? Get it — worth every single centavo. If you loved the first album, you’ll enjoy this. If only for “Hallelujah,” this record is still worth getting. And if you haven’t heard of Bamboo, the best CD to try would definitely be “Light Peace Love.”