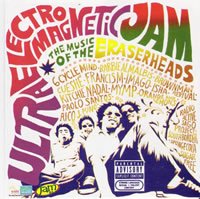 Several years after finally calling it quits, the first Eraserheads–related material finally comes out, a tribute album of their hits performed by current hot local acts. Many would argue that a tribute album would not do justice to the originals, something we can neither agree nor disagree with completely.

The album Ultraelectromagneticjam is a compilation of some of the E-heads better known songs, though some would wonder why their extremely big hits like Toyang and Minsan were never included. Seventeen songs personalized by a varied group of Filipino artists, worth it?

6 Cycle Mind’s Alapaap is a rockier version of the original, with noisier guitars but still retaining the beauty of the hit from Circus. Acceptable, but nothing too spectacular.

Magasin is the second track, performed by Paolo Santos, who was made popular by his acoustic rendition of hits from 80’s and 90’s. Compared to his hits from the past, his version of the E-heads song is rather dull, and definitely doesn’t sound like a cover version you’d expect from Paolo Santos.

Imago does give justice to Spoliarium, accentuating the haunting sound of the original to a higher level. Surely, they have made the song their own, in a good way.

Fourth on the list is Barbie Almalbis singing Overdrive, a passable rendition that definitely sounds like something from the former HYP singer. This can be compared to her recent works, which are rather too “pop” compared to her hits from recent years.

South Border sings With A Smile for the CD’s fifth track, and though they made it too R&B sounding, the track is really good. Duncan and Vince sound just the way they always sing, and Jay sings a verse that would make you wish he’d sing more.

Next on the list is Sugarfree singing Tikman, the song used for a Burger Machine ad campaign during the peak of E-head’s popularity. This one is comparably as good as the original, with Ebe Dancel’s voice sounding very much like Ely Buendia.

Kitchie Nadal follows with the E-heads’ first mainstream hit, Ligaya. This one sounds very much like classic pinoy rock, a style that’s very much emulated in Kitchie’s debut album. This is one of the better tracks in the CD.

Track number eight is Torpedo, sung by Isha, an artist I personally know nothing about, who does a sub-par job at giving justice to the song. Perhaps she was included to promote an upcoming album?

Francis M does give a very good job at Superproxy2K6, giving it his personal touch but at the same time retaining elements from the original. Among the artists on this record, he is probably the only contemporary of the E-heads members. But if you think hard about it, he is really way older than them industry–wise, considering his Mga Kababayan days.

Next is Orange And Lemons doing Huwag Kang Matakot, a rather average cover of the song. Mcoy’s singing is noticeably unspectacular, not as classic sounding as his vocal work in their albums.

Eleventh is Spongecola singing Pare Ko, at the same time ruining everyone’s good memories associated with the song. Yes, it’s that bad you’d wonder if they wanted to be part of this project in the first place.

Lucky 13 is Cueshe’s Hard To Believe, a song I find hard to believe that it is really part of this compilation. The original song was good, and so is the singing of Cueshe’s two vocalists in the cover, but come on, the song wasn’t really an E-heads hit.

Radioactive Sago Project gives a good take at Alcohol, (Alkohol) a remarkable non-hit in the E-heads discography. Lourd speaks his lines just the usual way he does, and the song comes alive just like the original. A really fun track.

Fifteenth is a song you’ve probably heard months before the others on this CD, Brownman Revival’s reggae take at the classic Maling Akala, one of the better tracks on this CD.

Next is an artist much unexpected to be part of this project, Rico J. Puno. He sings what probably was the E-heads’ biggest hit, Ang Huling El Bimbo, and does it rather well, incorporating his trademark growl in some parts of the song.

Seventeenth and last is Pasa Sa Masa, a fitting “ending” song. On this one, every artist sings in, with line by line exchanges between OPM’s current crop of vocalists. It’s like We Are The World and Do They Know It’s Christmas, though certainly in a smaller sense.

For only 300 pesos, this CD is a worthy gift to a “feeling teenager” E-heads fan, a good way to remember the good old days. And for the young ones, this is not a bad way to discover the music of the Eraserheads, the greatest ever in Filipino music.